I’m posting this because of its timeliness for me. My Aunt Peggy, my mom’s younger sister, died two weeks ago, and I’m grieving. She’s in heaven celebrating with Jesus, so I’m not without hope (I Thess 4:13). But that doesn’t fill the hole she left behind. And it reminds me of how close we were to losing my mom last year. I’m at that age where parents die, and it’s hard.

It’s important that I monitor myself to be sure my grief doesn’t turn to depression. The timeliness of this blog post has to have been God’s perfect timing.

In my last post, I mentioned writing a book. And I decided that I don’t need initials after my name to be an expert – particularly since it’s my story. Who knows it better than me, besides God? (“You saw me before I was born. Every day of my life was recorded in your book. Every moment was laid out before a single day had passed.” Psalms‬ ‭139:16‬ ‭NLT‬‬)

Ted first suggested it, many years ago. He said it during several of our therapy sessions. He thinks “I have a book in me.”

While living in Florida, my then-therapist Elizabeth told me that she, too, thinks I should write a book. She said it almost every time she saw me – that I should write it all down. And she’d buy it!

Carol and Anne and Stacy have been encouraging. So has Jane. Even Dad a little. I have support from several friends who think I could do it.

From where will I get my story? I began journaling consistently in March 2008 – right at the beginning of my depression journey. And I wrote lots! Some days I wrote several times throughout the hours, especially when I was in the depths of the darkness. How do I even begin to sort through them? I’ve developed a color-coding system with 3M sticky arrows, to highlight different entries I wrote that might be significant to outlining the book. Now to read through all 17 journals and flag them appropriately!

I also began to write email summaries of my appointments with Ted, often with questions for clarification, and I kept a copy of most of them. I wrote in Docs at work when I didn’t have my journal, so I have those notes. And finally, I joined WordPress to try blogging. Maybe I should print out these things and flag them as well.

I can add to this what I learned when I facilitated the depression support group at my old church. My friend advised when I shared with the attendees, I should simply start with my current situation. “Start with where you are.”

So, is that what I do if I want to write a book? Start with where I am now? Or start with the beginning of the journey? How will it be different from blogging? How do I know to whom I’m writing – who is my audience?

I’d like to write a memoir or devotional of the time of my life when I first experienced depression, up to present-day struggles. To explain to Christian women with depression (there’s my audience) that it’s possible to have hope in Christ in spite of having a mental illness. That I am not my depression – I’m a beloved daughter of the King, and so are they. I want to offer them this hope, as I found it in my journey through the desert of depression.

There are many tools and organizations available to me to help me write this book. A friend of mine just recently published his first book, and he recommended a writing program. Perhaps I’ll use one of those to keep me organized and on-task, and to give me regular feedback in the process. I took a one day writing workshop a few months ago – I need to get the workbook out and finish those exercises. They’ll help me be disciplined, too. Perhaps these tools can give me an idea of the order in which I tell my story.

No matter what, I think I know what my next adventure is. Let the writing begin!

I’ve been pondering the word “expert.” What makes someone an expert in an area? Could I be one? Do I need initials after my name to be considered particularly knowledgeable?

Merriam-Webster defines expert as: “having, involving, or displaying special skill or knowledge derived from training or experience.”

If experience is enough, then maybe I’m an expert in depression. I’ve lived with it for 10+ years. I’ve blogged about it for several years; indeed, the focus of my blog is being a Christ-follower who has depression. And I’ve read a lot about the subject, from textbooks to memoirs. I’ve started writing down my own story in a book draft.

Probably because this is an area of struggle for me, I find the topic of depression intriguing. I’m slowly building my personal library of books on the subject. My list of authors on my Book Buddy app who I’ve yet to read is 20+ titles. I regularly read several mental health blogs.

At my most recent appointment, my therapist asked me why I wasn’t a counselor. Funny thing… I’ve thought a lot about that. Way back in my early college years, I thought I wanted to be a psychologist. Then as I got tired of school, I decided getting a PhD was too much work, so I nixed the idea. But I’ve come back around, and am intrigued by her suggestion. I’ve spent the last couple of days researching online Master’s counseling programs.

I want to help people through mental health challenges. I love my role as a facilitator in the Fresh Hope support group. Tuesday night is the highlight of my week, as we meet and talk about what it means to live with a mental illness. I love navigating the discussions and leading the group. As I’ve said before, I feel like this support group is a way for me to give back, from all the help and encouragement I’ve received as I’ve journeyed with depression. It’s an answer to prayer, from when I begged God to not waste my experience in the darkness.

I love families, and family dynamics. I find them fascinating. I’d like to help people build healthy family and marriage relationships.

I’d also like to be an expert in the field of counseling. Of mental health. To have those initials behind my name. So that when I write my book, I’ll be taken seriously.

But returning to the dictionary’s definition, I don’t need those letters. My experience, my research and reading, may be enough.

Maybe I do know what I’m talking about.

I met my only cousin on my dad’s side last night for an event and dinner. It’s the second time in two years. Before that, it had probably been 10 years since we’d seen each other.

We didn’t grow up together with lots of cousin visits. I have a few pictures of us as kids – she’s a little older than me, and her family lived far away, so we just didn’t see each other much.

We reconnected via WordPress University – a blogging class that WordPress offered several years ago. We both blog – she about her family genealogies, and me about depression as a Christ follower. We were excited to share comments back and forth as we read each other’s blogs. She has done quite a bit of research on our grandfather, and it’s been so fun to read about our grandparents and their families.

A year ago, she told me she was coming to the area for the Virginia Festival of the Book. So I found a presentation on mental health books, and we met there. We enjoyed the panel, but had even more fun at dinner and a wine bar. I spent the night in her hotel room – she showed me love letters from our Papa Joe to his wife Kitty. We really had a great time reconnecting.

This year’s Festival of the Book rolled around, and we met for a panel last night, then went to a local pub. It was fun again to connect and catch up. And we made plans for June when my folks visit, to take a trip to Washington D.C. and see places of our dads’ and grandparents history! She’ll be the guide, as she knows the places. But we’re expecting “the trip down memory lane” to spark some stories from my dad. I’m excited!

And I’m so happy to have renewed a relationship. The older I get, the more important family is to me. So I’m thrilled that “cuz” and I have a new tradition. Two years and counting! 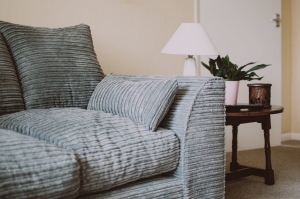 Today I met with a new therapist. And I really like her. So my second impression is great!

My first impression wasn’t so good. My appointment was at 9:15am. I got there at 9:00am in case there was additional paperwork. Though the hours listed on the door said the office opened at 9:00am, no one arrived until 9:05am, and it was another therapist. She commented that it looked like everyone was running late. There was no receptionist, so I held on to my intake forms.

I entered the waiting room with another client, after signing in on the clipboard. My phone rang – a “No Caller ID,” so I didn’t answer. I’ve been getting lots of robocalls, so I tend to let them go to voicemail, if they even bother to leave a message. I then turned on Do Not Disturb, so my ringer didn’t go off during my appointment.

The therapist who had unlocked the doors came and took her client – the other woman in the waiting room – back to her office.

I checked my phone, and the caller had left a message so I clicked voicemail. It was the therapist, telling me that she was running 15 minutes late, and that the receptionist was out this morning. Good to know – at least I was assured that she was on her way.

I dropped my Starbucks cup into the bathroom’s garbage can. There were scraps of paper towel on the floor, and the can was overflowing, though I pushed it all down.

As I sat back down in the waiting room, I noticed a wear mark on the opposite wall where a chair had apparently worn through the paint. There was a small table with crayons and paper, and toys nearby. I looked at the artwork on the walls, which was a hodgepodge of pictures. There was no pattern to them, but each picture was pretty and relaxing. Maybe that was the theme – calm!

My therapist arrived at about 9:35am, and took me back to her large overflowing office. I think she is the owner of the practice – her name is first on the letterhead. She’s a very busy woman – owner of this practice plus another office in a nearby town plus teaching at a local college. Given her many commitments, I was impressed with the time and attention she gave me.

She asked great questions – there’s lots to share as we get to know each other. She was open with me about her personal faith in Jesus, which is really important to me in a therapist. She was friendly, kind, genuine, and has a wonderful smile which reaches her eyes. Her schedule is very full, but she found a slot in which to schedule me next week.

I’m excited to see her again. I won’t let those first impressions darken my judgement. My best friend reminded me of my “lateness factor in our relationship” and she “loves me still.” So I’m extending that same grace to this new therapist’s office. And now that I realize how busy she is, I’m all the more grateful that she’ll take me as her client!

Follow Sunny with a Chance of Clouds on WordPress.com
Join 450 other subscribers

Thanks for the awards as I started blogging, but this is now an